The sea was incredibly rough at dinner as we sailed from Bay of Islands to Auckland. I woke up early- just after 4am and everything was flat calm, we were in the Hauraki Gulf, I could see Rangitoto, the lights on Waiheke and then suddenly the lights of Auckland. I stood on our veranda for about 10 minutes before going back to bed and sleep. When I next awoke it was just before 6 am and we were docking at Princess Wharf. The Norrdaam was at Queens Wharf, we ate breakfast and then just sat on the veranda watching the ferries and marvelling at the stunning beauty of Auckland Harbour. We were off Regatta by 8 am, Paul drove the car right onto the wharf, we dropped him at work and were on the Southern Motorway just after 8. Thanks to two multi car nose to tail accidents we were still on the Southern Motorway at 9am! However once clear of them we had a good run and arrived in Cambridge just before 11am,. We stopped at the Drs to pick up some forms and make appointments for next week,. While there I had to grab the counter as I got “sea leg wobbles”. All gone this morning.

It was over 28 degrees when we arrived home and most of the garden survived but in three weeks there had been huge growth- incredible. 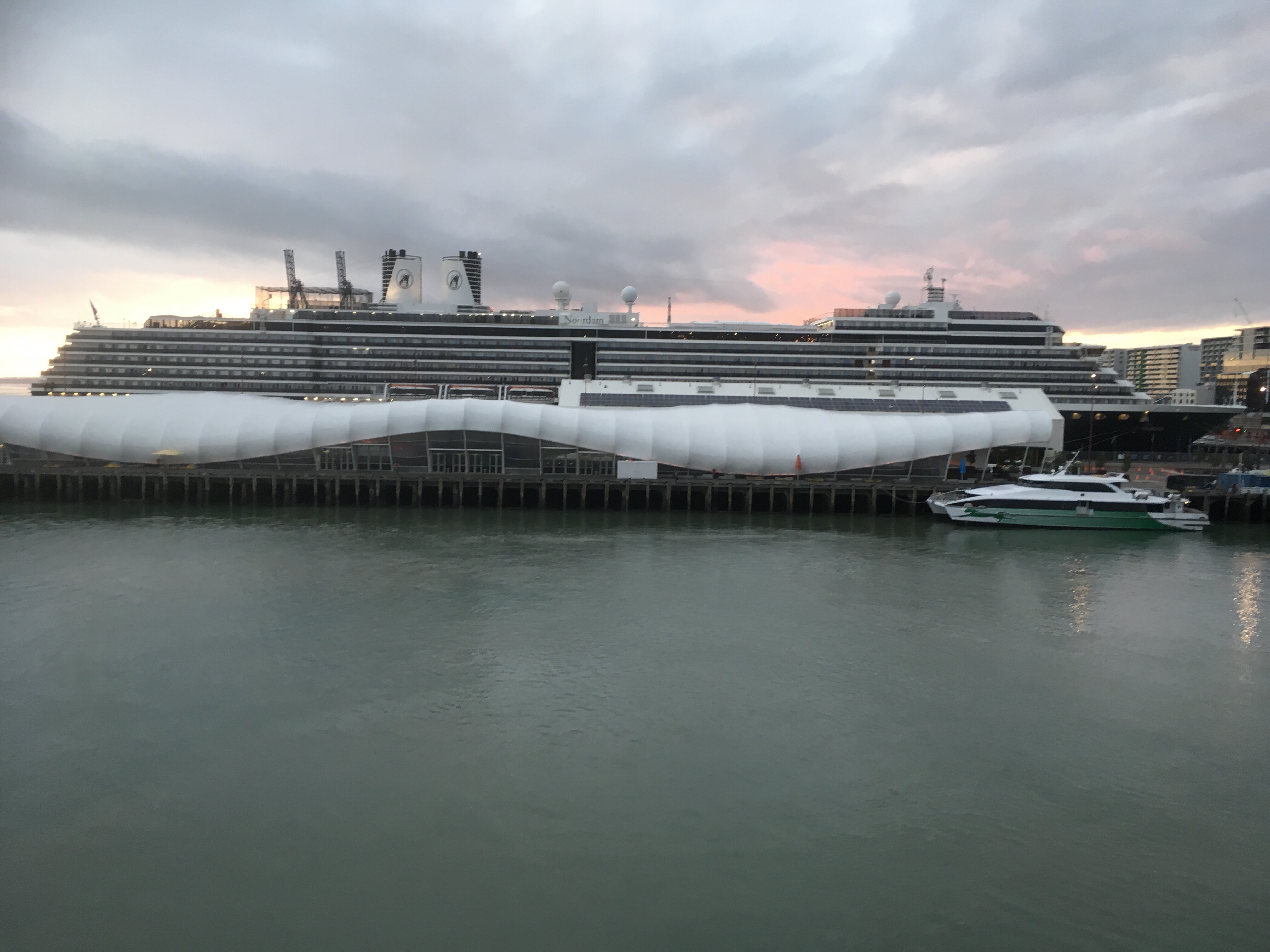 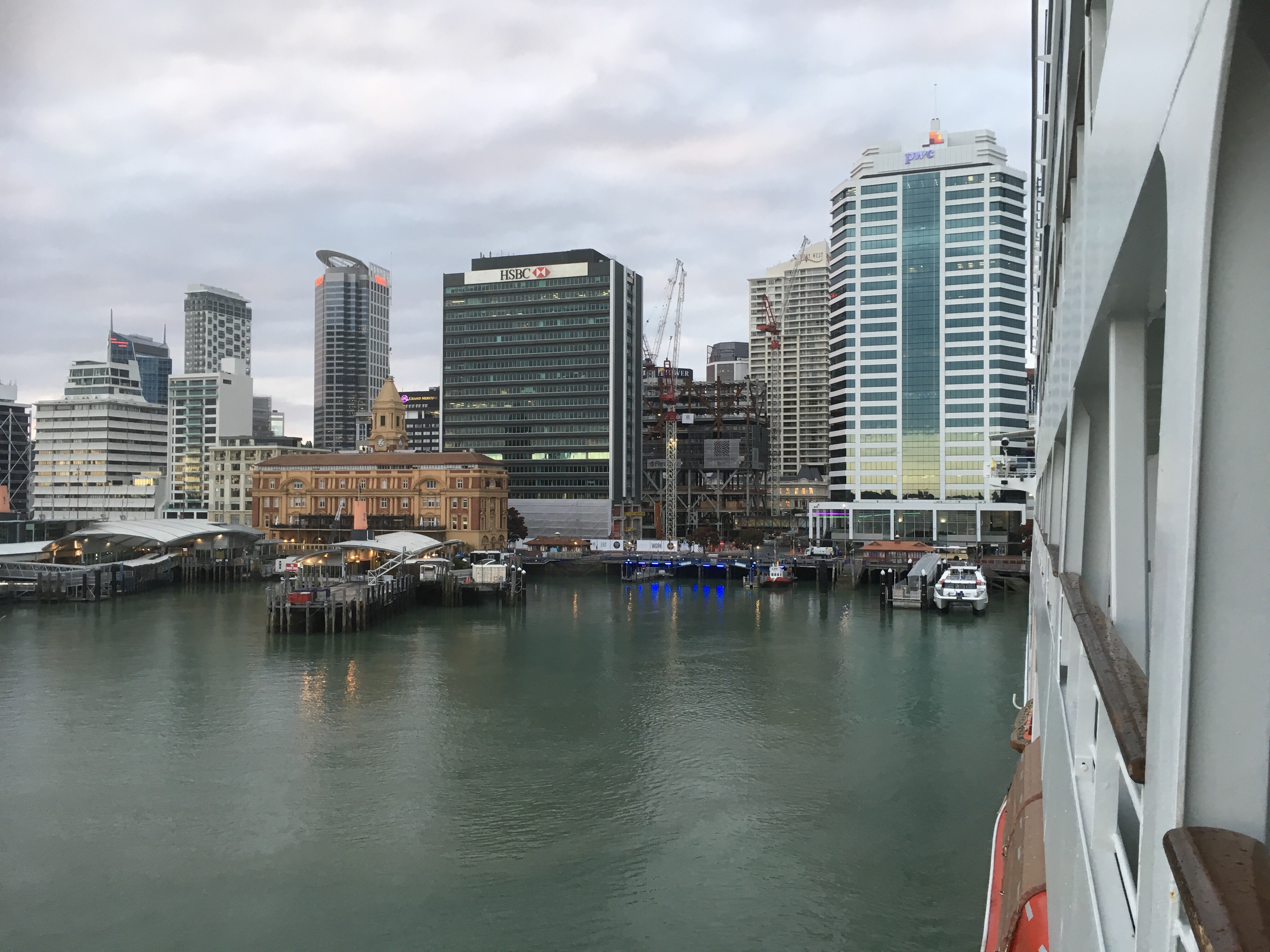 Another bumpy tender ashore – it is the getting on and off when there is a swell, the tender crashing into the ship, then trying to get them steady before moving from one to another. We anchored quite far out just past the Waitangi Treaty grounds and went to a newish jetty by the Hotel at Waitangi. We then walked around to Paihia and caught the shuttle back. The town is certainly geared up for cruise ships and had a great market set up with quality goods. I bought a lovely handmade leather handbag and Andy bought himself a handmade leather belt. Hi 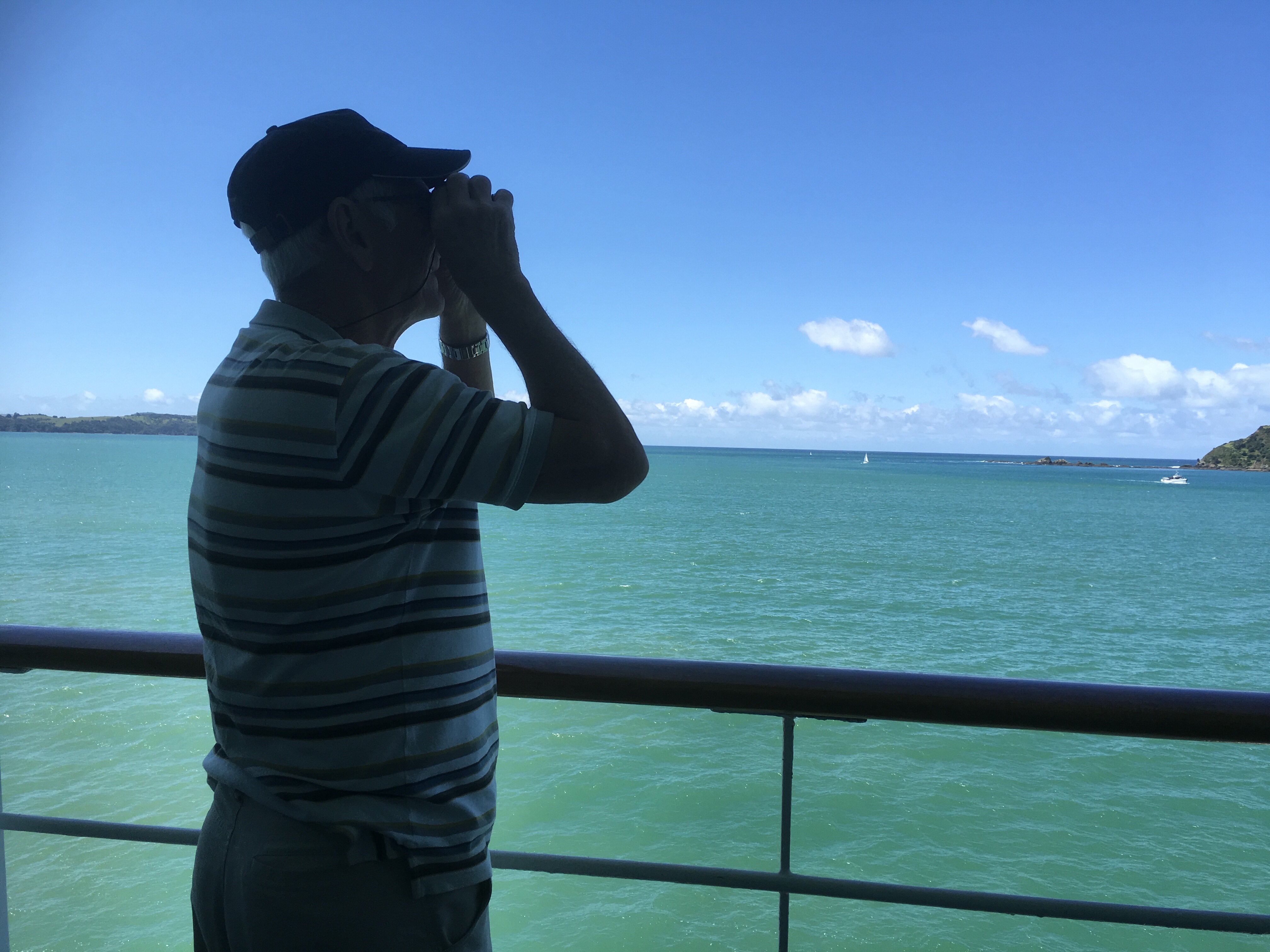 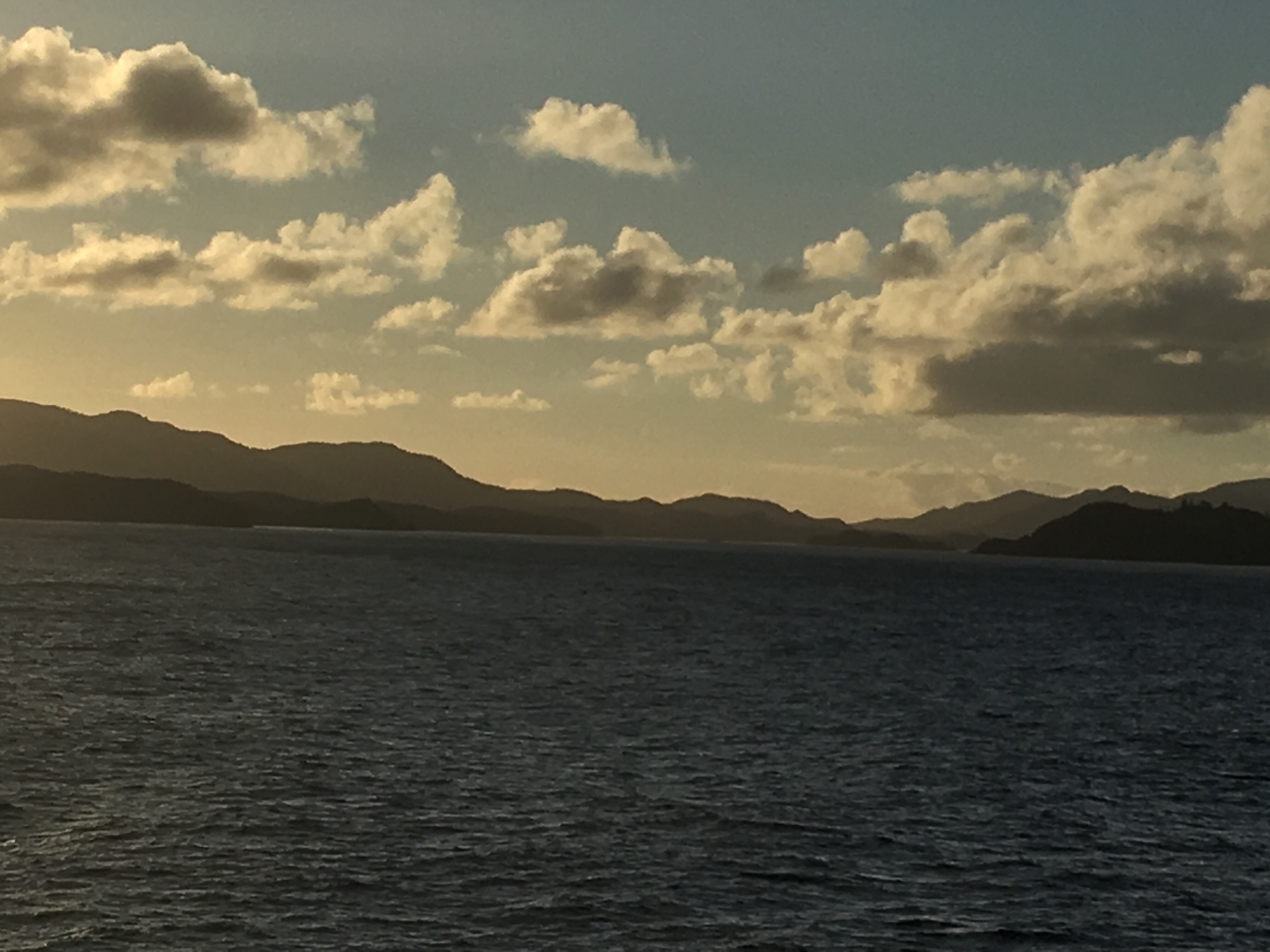 Filed under: Uncategorized — snrfluffy @ 4:12 am

Hmm slightly rough seas, difficult jetty surrounded by reef. Got there and back by ship’s tender, not without a little drama. Lovely place, but best outcome is that Andy no longer wants to fly here for a holiday! 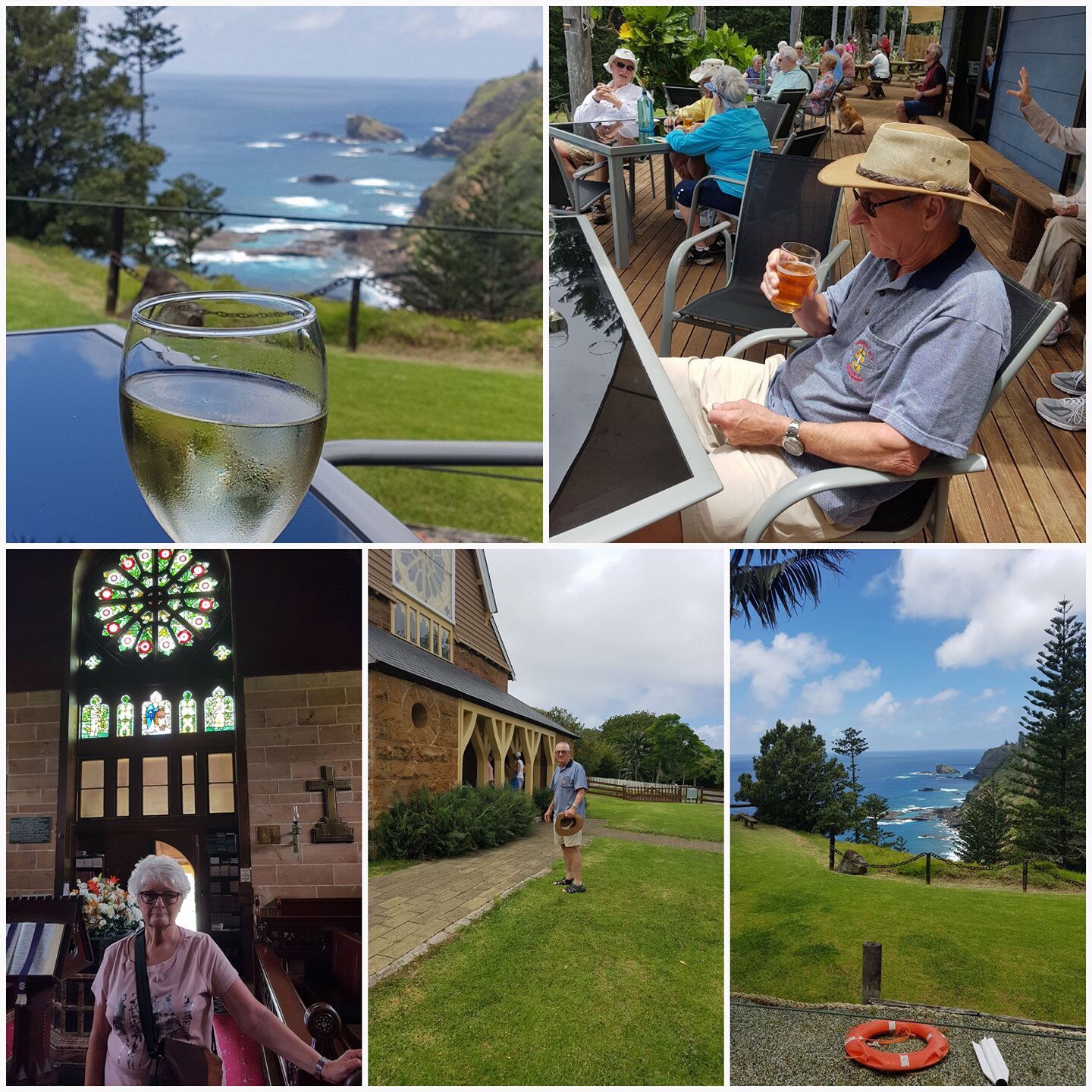 Two days in Fiji, two nice excursions. On Wednesday we were in Suva and went out to a Spice farm and village, it was interesting but the rain came and then the oppressive heat. Yesterday, Thursday we were docked in a Lautoko where we drove to an Orchid garden, very lovely and interesting, then we drove to Nadi to shop, I was impressed that the town was so much tidier than last time I was there. Perhaps floods in 2014 meant that a lot of the shops were rebuilt. On our way back to the ship we stopped at a village where we were entertained by beautiful singers, the village was very poor so we all felt obliged to buy some of their cheap bracelets by way of thanking them. Last night we were dinner guests of the Oceania Club Ambassador and the Cruise Director. Had great fun, Andy really hit it off with another guest, Victor from West Hollywood. We had lots of laughs and my head cold suddenly didn’t seem so bad! Two sea days now and the weather has cut up a bit rough – bugger, but not to worry. Will add a few snaps from Fiji. 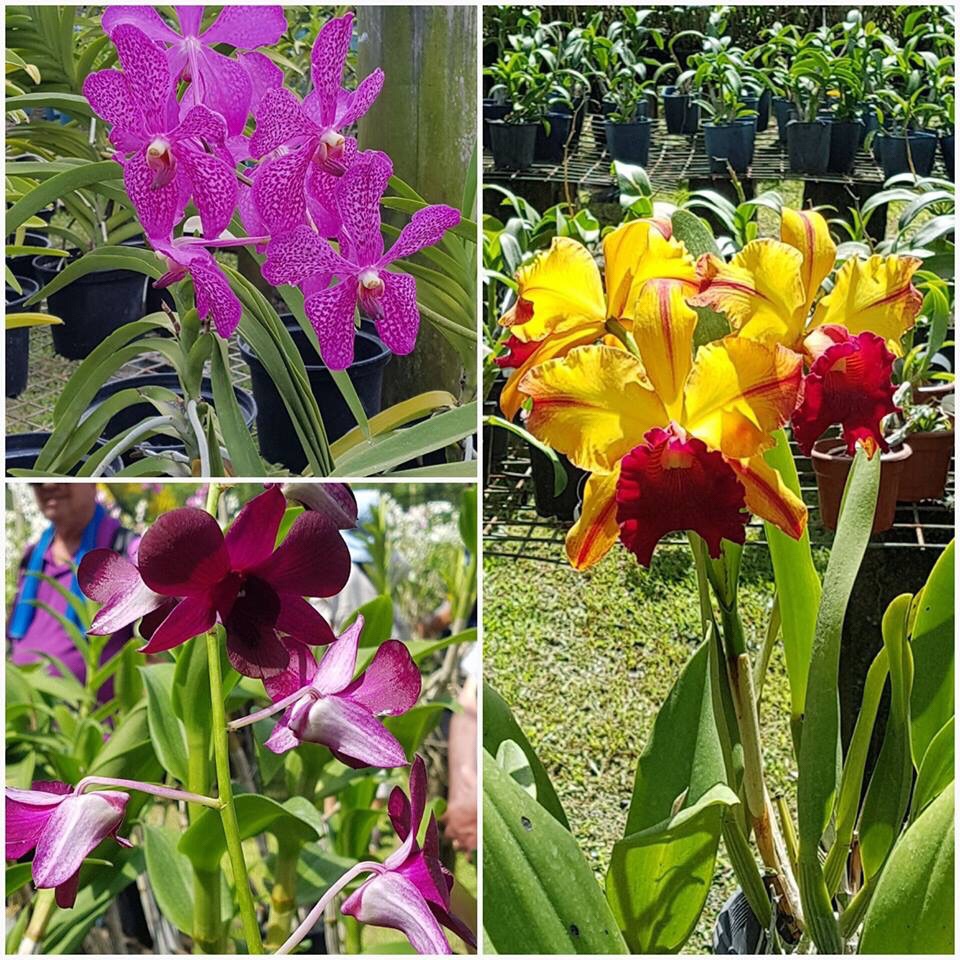 Filed under: Uncategorized — snrfluffy @ 2:56 am 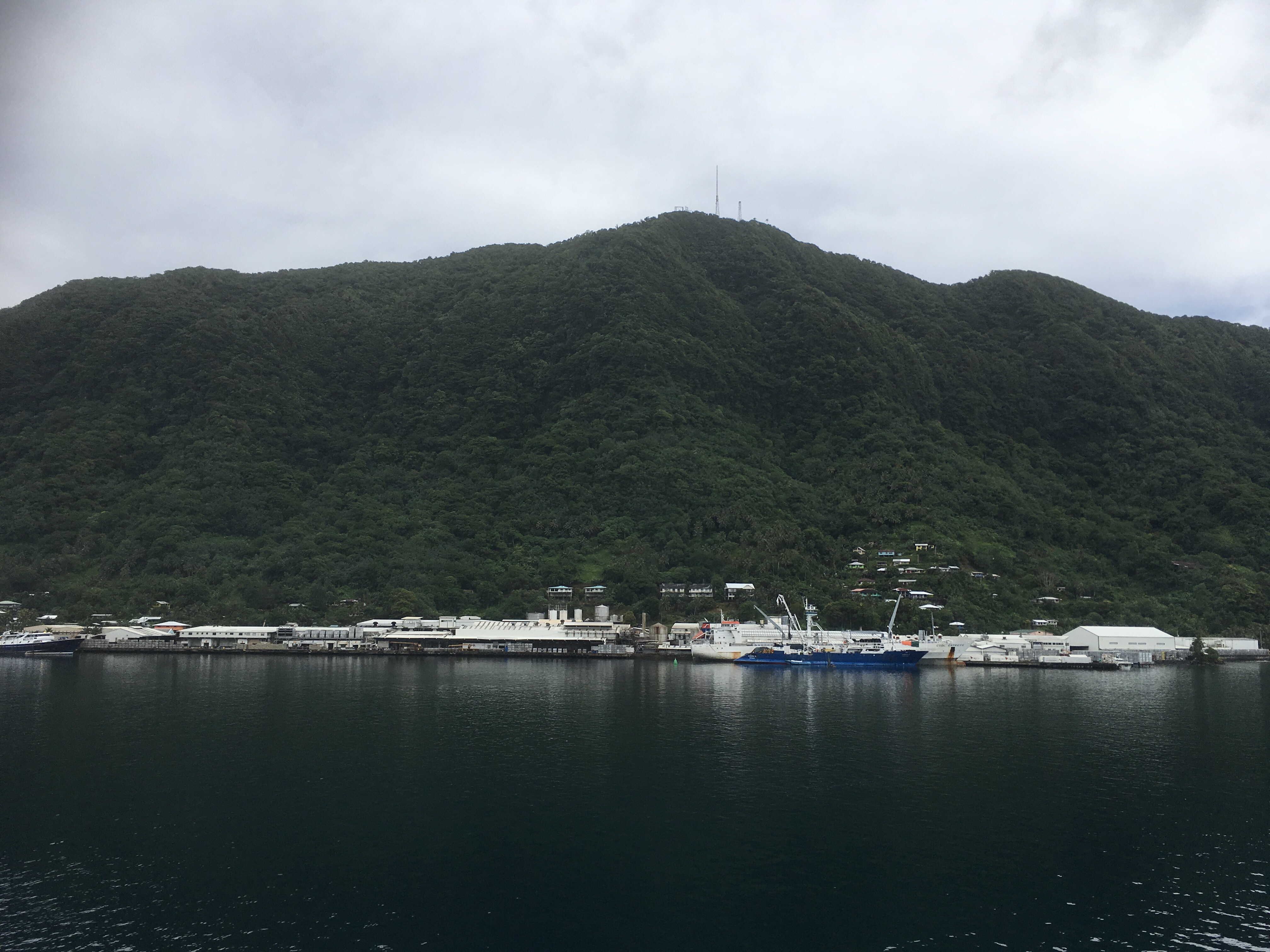 Brisk walk on the deck at 6.30am, breakfast in the grand Dining Room then a talk on the history of Cultured Pearls more especially Tahitian Pearls, then off to a cooking demo then a winning spell on the slots followed by lunch. Now day dreaming on our veranda.

The scenery is stunning, so many little islands, luxurious hotels. But the reality is their economy is in decline and 6 of the 16 hotels have closed and are becoming derelict in this humid tropical climate. Everything here is hideously expensive except for the beautiful fruit and flowers. A very basic cotton type dyed poncho was US$50. Needless to say to didn’t purchase, 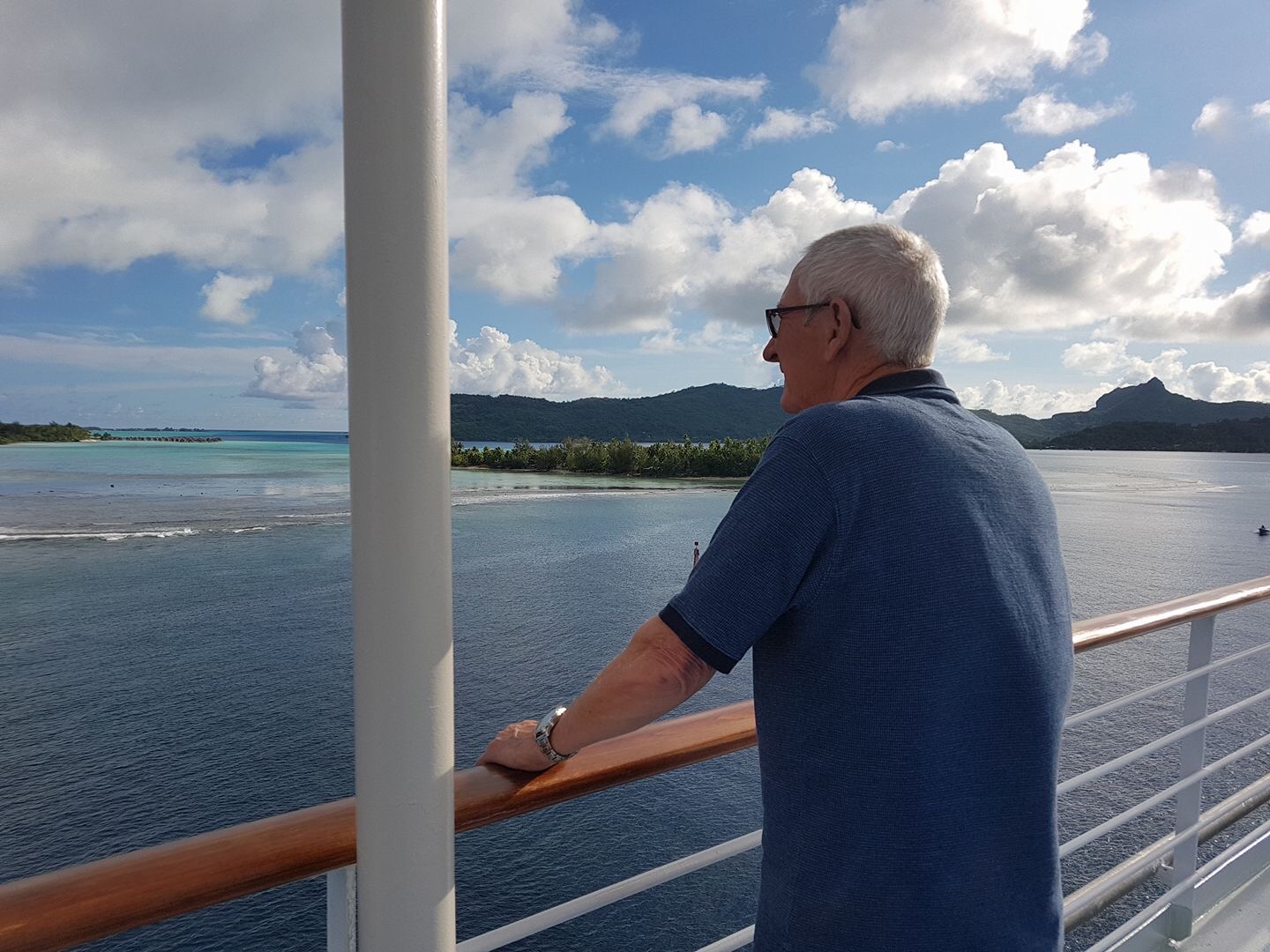 Filed under: Uncategorized — snrfluffy @ 2:42 am

But no real beaches here. 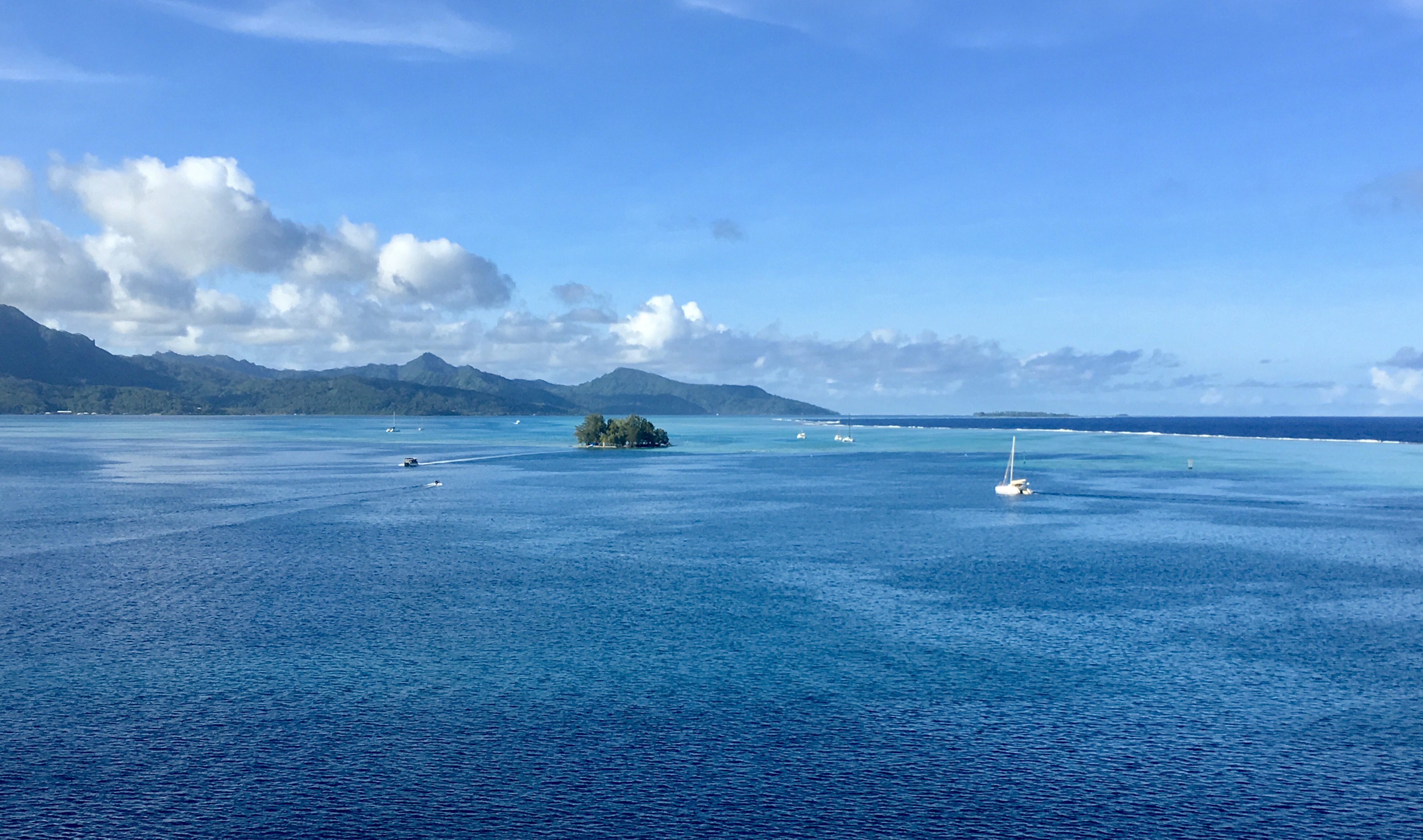 Papeete looks nice at night from our cabin but was still a dive, pretty much as we found it many years ago November 20, 2017 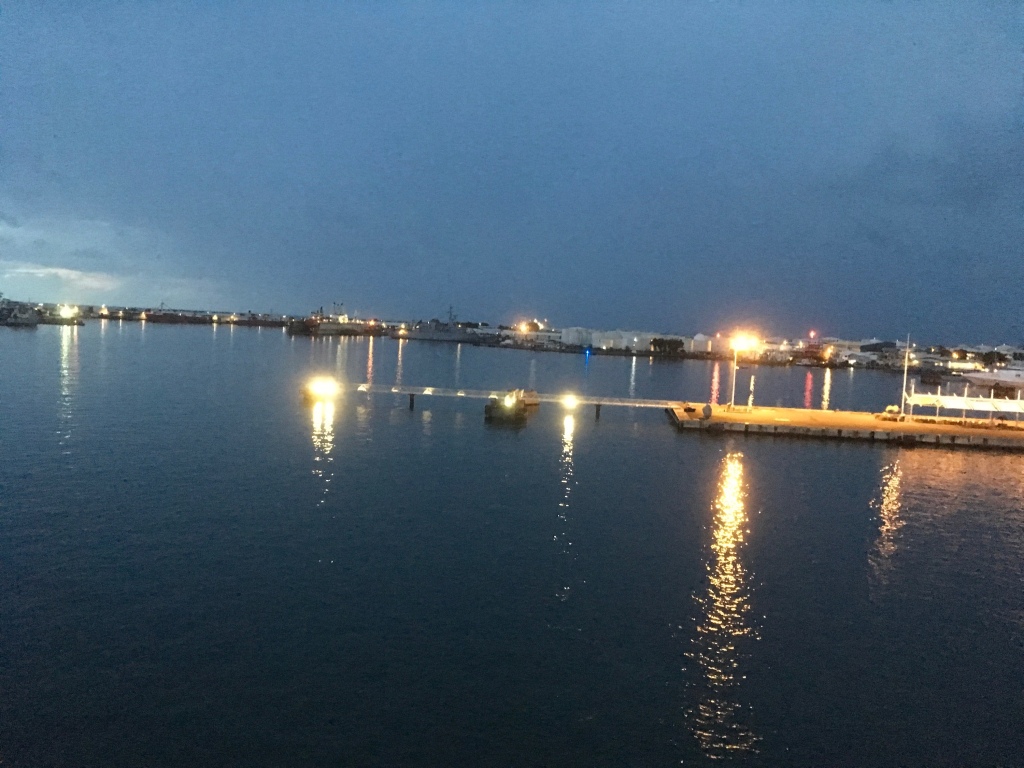 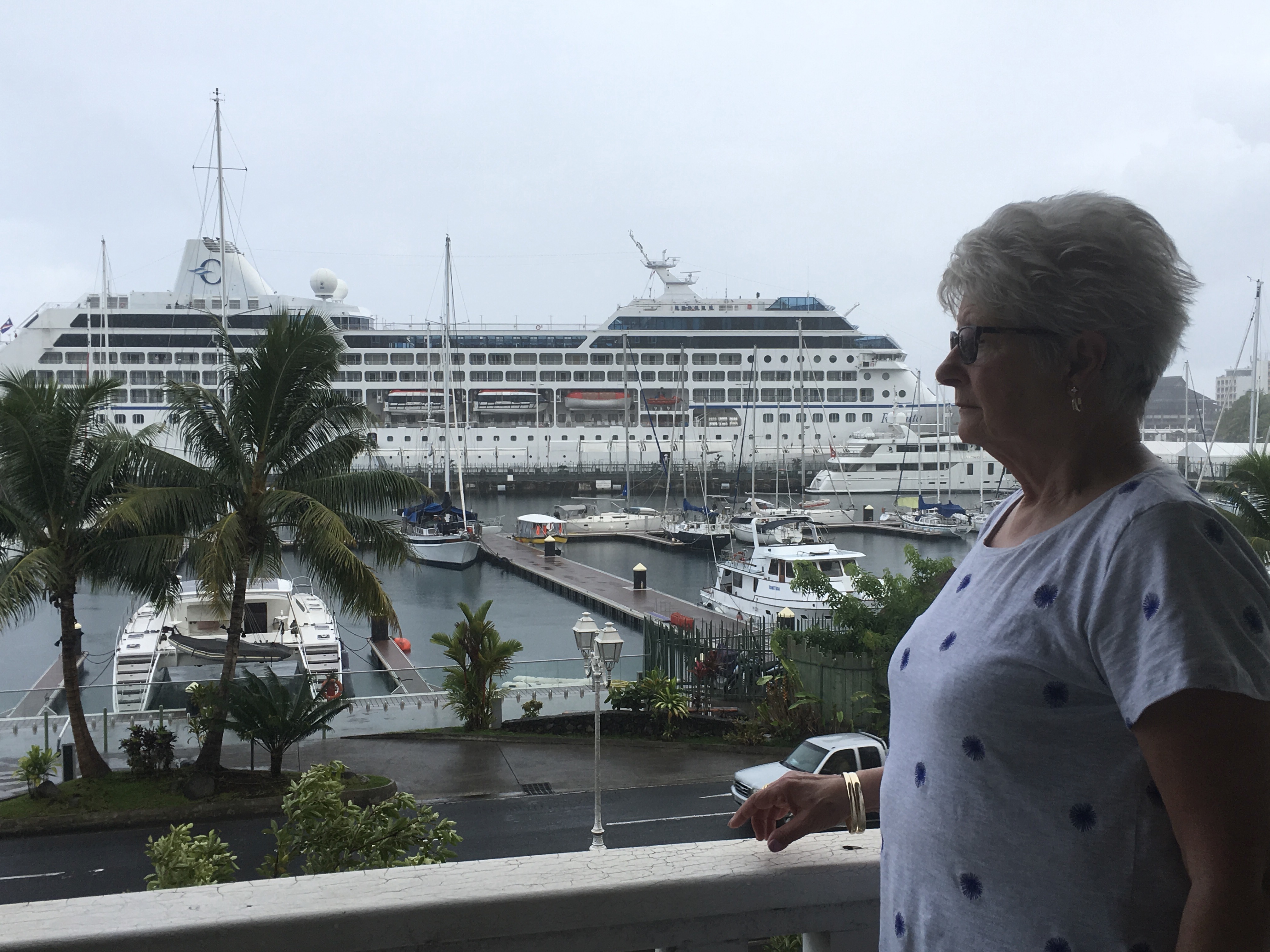 Moorea. Rained most of the morning, we went ashore briefly as we had spent 10 days here many, many years ago